It seems like every week in the vegan food news is more exciting than the last and this week is no exception. Babybel’s dairy-free cheeses are making their way onto store shelves, including at Costco where eagle-eyed vegans spotted 32 packs of these plant-based babies. Baseball season is here and the only way to celebrate is with a vegan Dodger Dog, which you can now ship nationwide. And Trader Joe’s keeps launching new vegan products and this week it’s dairy-free nacho dip. Read on to find out more.

We’re finally living in a time when our favorite childhood snacks are going vegan and that’s true for Babybel’s iconic wax-coated cheese snacks. French company Bel Group is committed to entering the modern age of food by reinventing all of its flagship products, including Boursin, Babybel and Laughing Cow cheeses. The company’s first step in this direction was the 2020 launch of a dairy-free Boursin, which it developed into a Garlic & Herb flavor with help from vegan brand Follow Your Heart.

Then, the 150-year-old dairy brand tackled Babybel cheeses with the release of Babybel Végétal cheese. The dairy-free cheeses began rolling out in the US in March after being introduced in the UK through major retailer Sainsbury’s in January. This week, the little dairy-free Babybels, which are wrapped in green wax, were spotted by our friend @BigBoxVegan in 32-cheese bulk packs at Costco stores for $12.99. That’s because vegan cheeses are now rolling out at select Costco locations in the Southeast, Whole Foods, Fresh Thyme and Sam’s Club with more retailers coming soon.

“Babybel is an iconic cheese brand, so it was imperative that we offer a plant-based offer that meets our consumers’ expectations in terms of taste, texture and quality,” said Mélanie Nemoy, Brand Director at Babybel, in a statement. . “Ultimately, our fans had the final say on this product after many rounds of tasting and refinement.”

And after? Bel Brands is currently working on developing a dairy-free version of its Laughing Cow wedges and hopes to bring them to market in 2023.

The MLB season officially began this week and to kick off the festivities, vegan brand Field Roast and culinary icon Roy Choi are offering vegan Dodger Dogs to baseball fans around the world. Together, the duo designed the “Stadium Dog” Vegan Hot Dog Kit ($45.95 plus shipping) which is now available for nationwide delivery via Goldbelly. The hot dog kit was born out of a years-long collaboration between Field Roast and Choi, a pioneer of the Los Angeles food truck scene with its Korean fusion Kogi Truck. 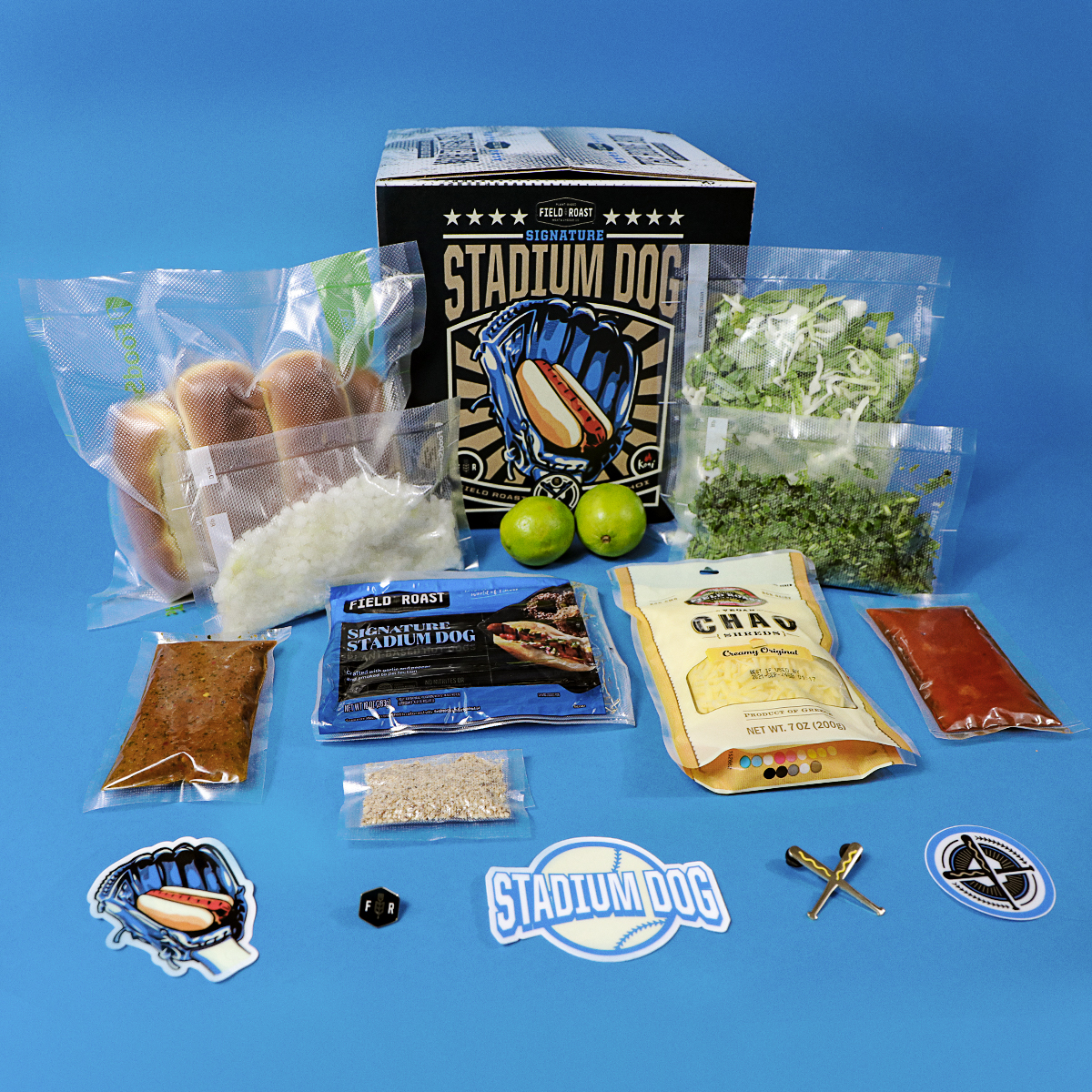 3Earl of Sandwich is getting into vegan barbecue

Earl of Sandwich has a virtual monopoly on royalty-themed sandwich chains — alongside Burger King, the king of burgers, of course — and the noble sandwich shop is getting a whole lot more vegan. Last January, the chain added its first plant-based hot sandwich, Vegan Cannonballs!, to its permanent menu. The hearty handheld includes vegan meatballs, dairy-free mozzarella, meatless marinara, and Italian seasonings. 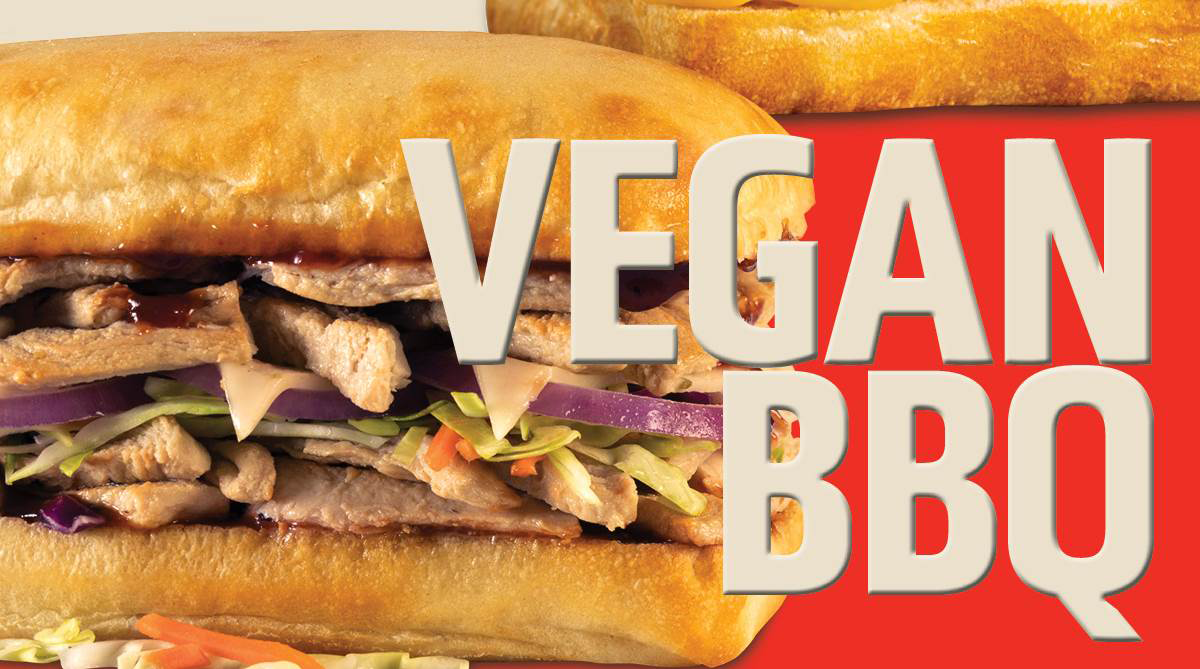 This week, the Earl of Sandwich announced a new (and exciting) limited-time offer: The Vegan BBQ. A sandwich fit for an Earl (or even a Duke), this one features vegan chicken, dairy-free pepper jack cheese, vegan coleslaw, onions and barbecue sauce. The Vegan BBQ Sandwich is now available at participating Earl of Sandwich locations for a limited time where it is made with non-vegan items.

4Beyond Meat is coming to Rite Aid

Starting this week, Rite Aid shoppers in approximately 2,000 locations can purchase Beyond Meat products alongside their toilet paper, household cleaners and beauty products. The vegan brand’s Beyond Burger and Beyond Meatballs will be sold in the frozen section of Rite Aid, where Beyond Meat hopes to reach a slew of new customers.

“Our goal is to make plant-based meat accessible to consumers, wherever they buy. With convenience being key to meal prep, we’re making it easier than ever to incorporate Beyond Meat into your next meal by offering our products in Rite Aid stores nationwide,” said Deanna Jurgens, Director of growth at Beyond Meat, in a statement. “Expanding our presence in retail channels, including pharmacies, is a natural next step as we aim to bring nutritious and sustainable plant-based protein to even more communities across the country. 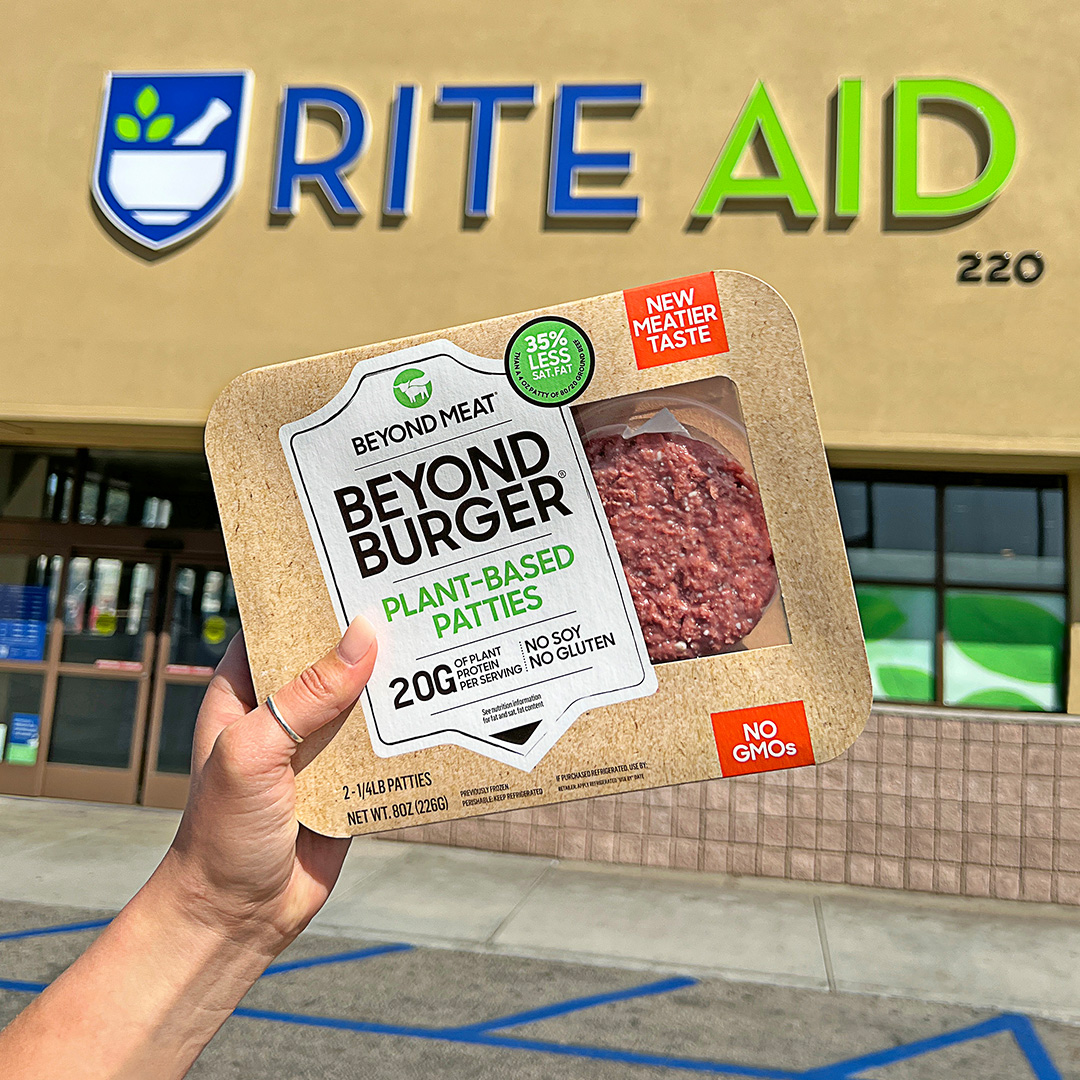 Beyond Meat has already broken into the drugstore category with a launch in 7,000 CVS locations in 2020. Its expansion into Rite Aid means plant-based meat will become even more accessible, good for animals, people and the planet. .

“We are proud to partner with Beyond Meat to provide our customers with additional healthy food options,” said Erik Keptner, director of marketing and merchandising at Rite Aid, in a statement. “By offering Beyond Burger and Beyond Meatballs in the vast majority of our stores, we are responding to our consumers’ growing demand for products that support their lifestyle.

From dairy-free tzatziki to caramelized onion to Buffalo, we’re pretty blown away by Trader Joe’s growing collection of vegan dips. This week we welcome Vegan Nacho Dip to our party platters. The new dip costs $3.99 per eight-ounce container and is made with organic cashews, coconut oil, tapioca starch and is colored with fruit juice and vegetables. 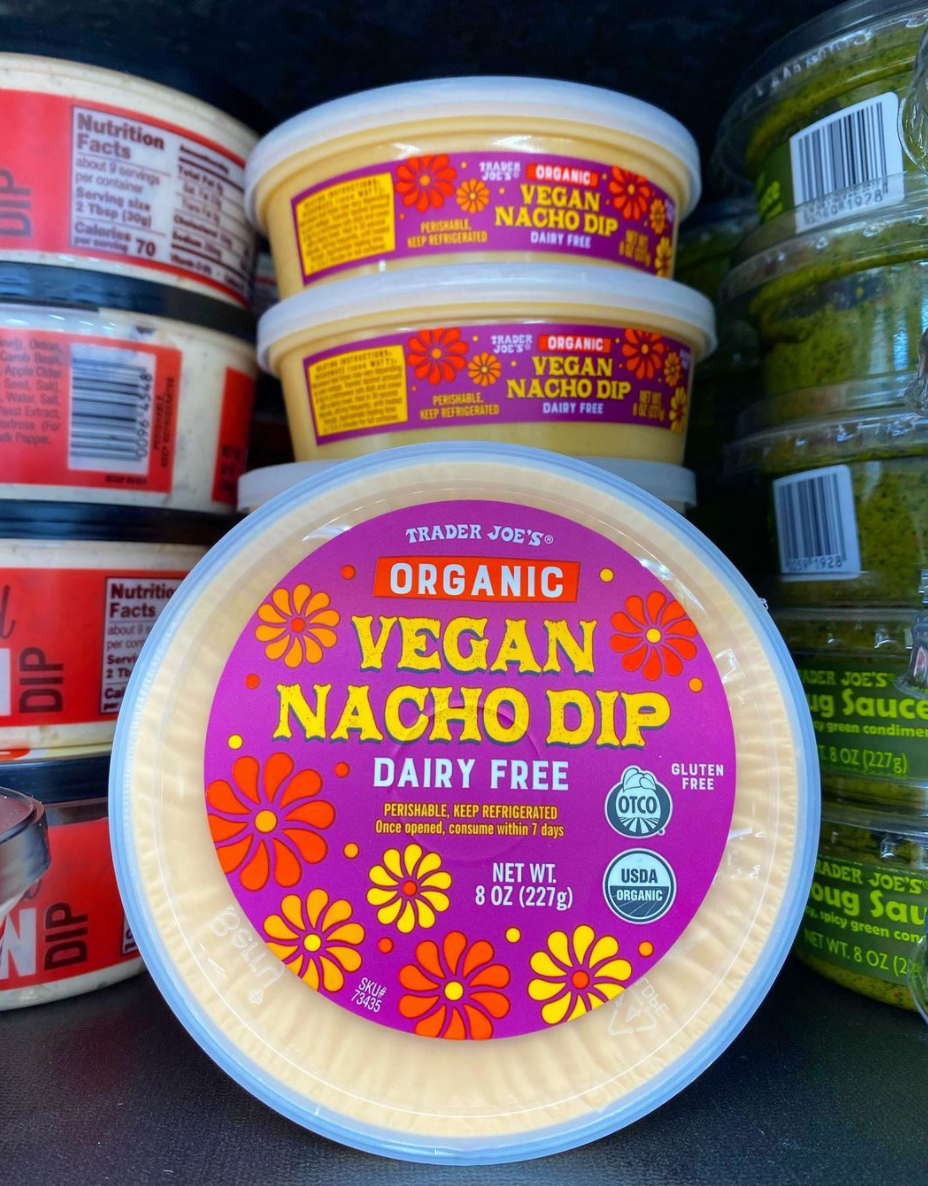 Some customers have speculated that it’s a direct replacement for TJ’s Cashew Fiesta Dip that the grocery chain introduced in 2018 and discontinued a few months ago. However, this dip is completely gluten-free, not made with potatoes (like the fiesta was), and tastes a bit creamier.

For a sweet finish, this week we’re celebrating the launch of KLIMON Vegan Ice Cream at Walmart stores nationwide. The brand’s first line of ice cream is made with a proprietary almond-based blend that gives it a dairy-like creaminess without any of the downsides of dairy. 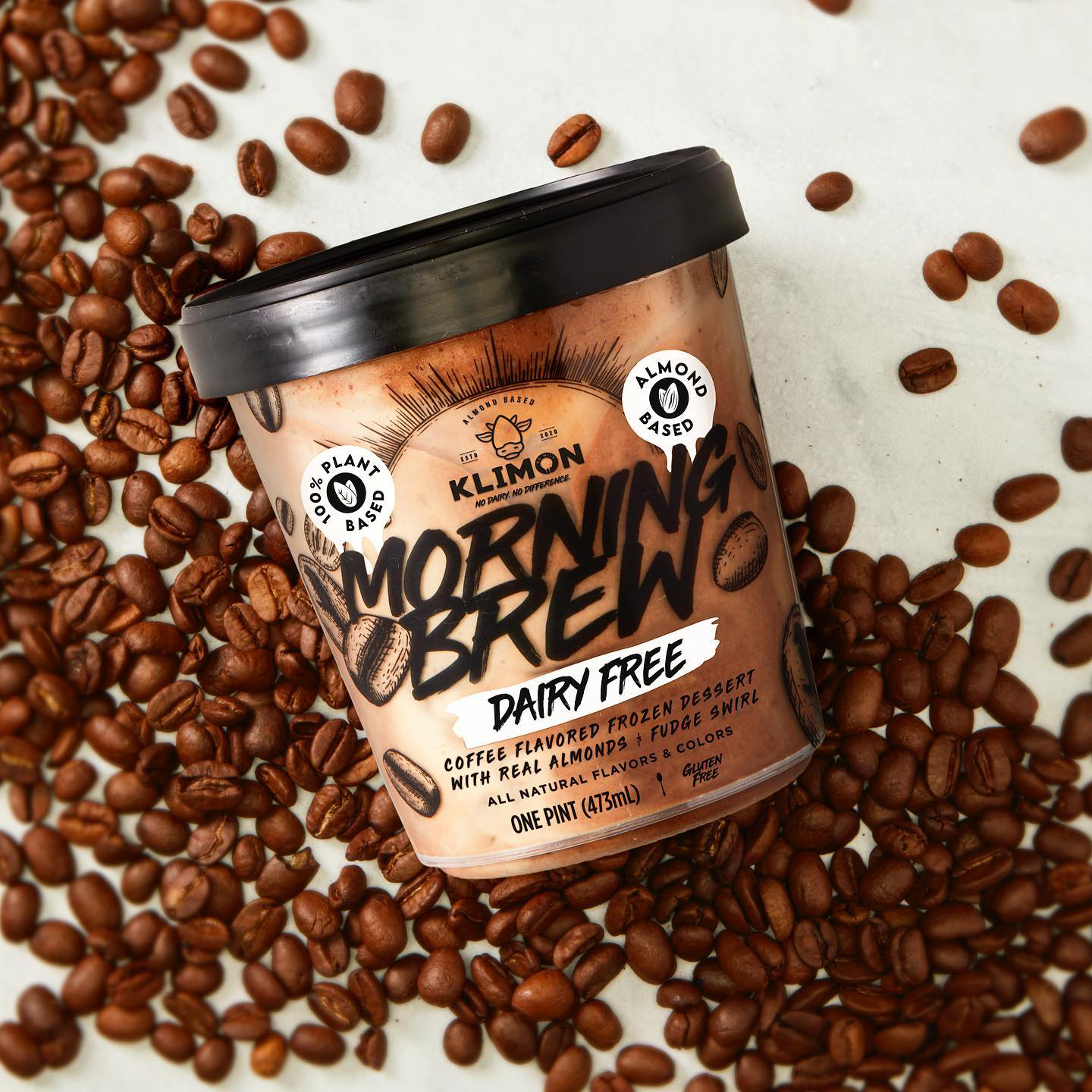 “We are very proud to partner with Walmart for the launch of our brand and to continue to leave our mark on the plant-based food revolution,” Alex Cotraviwat, CEO and Founder of Jaback Group (developer of the KLIMON brand), said in a statement.

For the latest vegan news, read:
Have you heard of McPlant? Why McDonald’s Netherlands gets the “McYam”
A new study shows how a vegan diet can reduce the risk of diabetes
How Vegan Vikings Star Sam Corlett Got So Fit (Mushrooms Were Involved)