It seems like every week in the world of vegan food news is more exciting than the last and this week is no exception. Fast food chain McDonald’s is set to add its first meatless burger, the McPlant, to its menu across the United States. Meanwhile, fast food chain Amy’s Drive-Thru, which serves an entirely meatless menu, aims to open 30 establishments by 2027. Outside of the fast food world, ice cream brand Coolhaus is getting a makeover. dairy-free thanks to Perfect Day’s Animal-Free Whey, there’s a new plant-based brand just for kids, Chance the Rapper just got a vegan flavor from Ben & Jerry’s, and a few vegan startups have amassed it. serious money this week. Read on to find out more.

The Golden Arches are shining brightly this week at eight McDonald’s restaurants where McPlant Burgers, the fast food chain’s first meatless burger made in partnership with Beyond Meat, are hitting sales targets. Selling around 70 McPlant burgers a day, Wall Street analysts say, means McDonald’s is set to roll out the McPlant to other locations and possibly across the country.

While McDonald’s and Beyond Meat are silent on expansion plans for the time being, we look forward to the day when plant-based foods at McDonald’s won’t be that hard to come by. Now, if McDonald’s US could follow the McDonald’s UK route – where the McPlant is offered as an all-vegan burger, cheese and everything – we’d order them by the dozen, keep the fries.

Speaking of fast food innovations, Amy’s – you know, the maker of that vegan margherita pizza in your freezer and soup on your shelf – is expanding its drive-thru concept to the West Coast, starting with its fourth location in Roseville, California. . Amy’s Drive-Thru serves a wide variety of healthier fast food, including burgers, grilled cheese sandwiches, burritos, macaroni and cheese, and milkshakes, all of which can be ordered vegan. 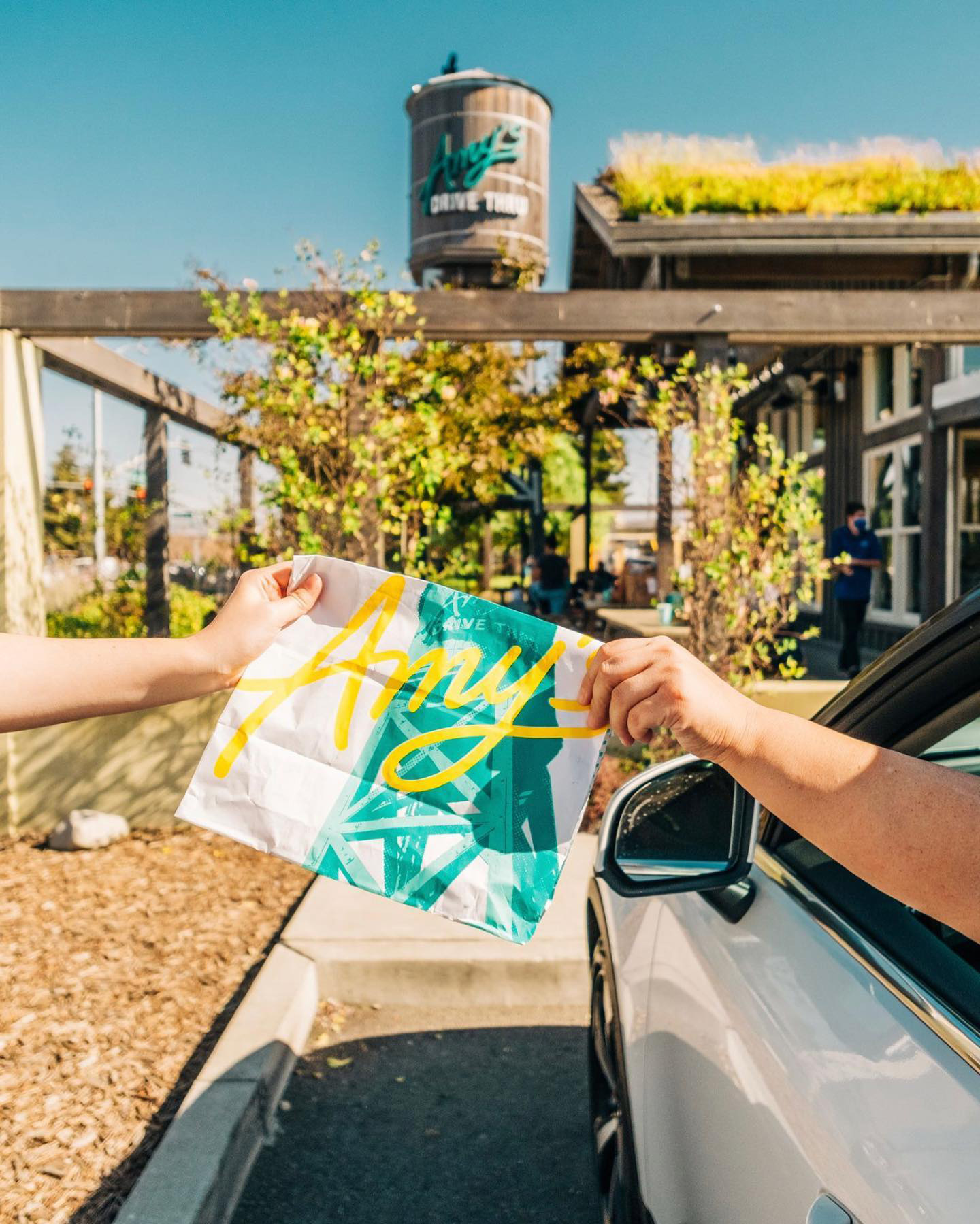 Amy’s Drive-Thru plans to operate up to 30 sites by 2027 with its first Southern California outposts slated for Thousand Oaks and Aliso Viejo next year. Looks like a trans-Cali road trip is in order. Who pays for gas?

What could be cooler than cool? The woman-owned ice cream brand Coolhaus not only inspires and supports LGBTQ and BIPOC communities with its vivid flavors, but is now becoming a dairy-free business. The brand was acquired this week by The Urgent Company (TUC), the consumer packaged products arm of food tech startup Perfect Day, which makes identical dairy proteins without exploiting cows. 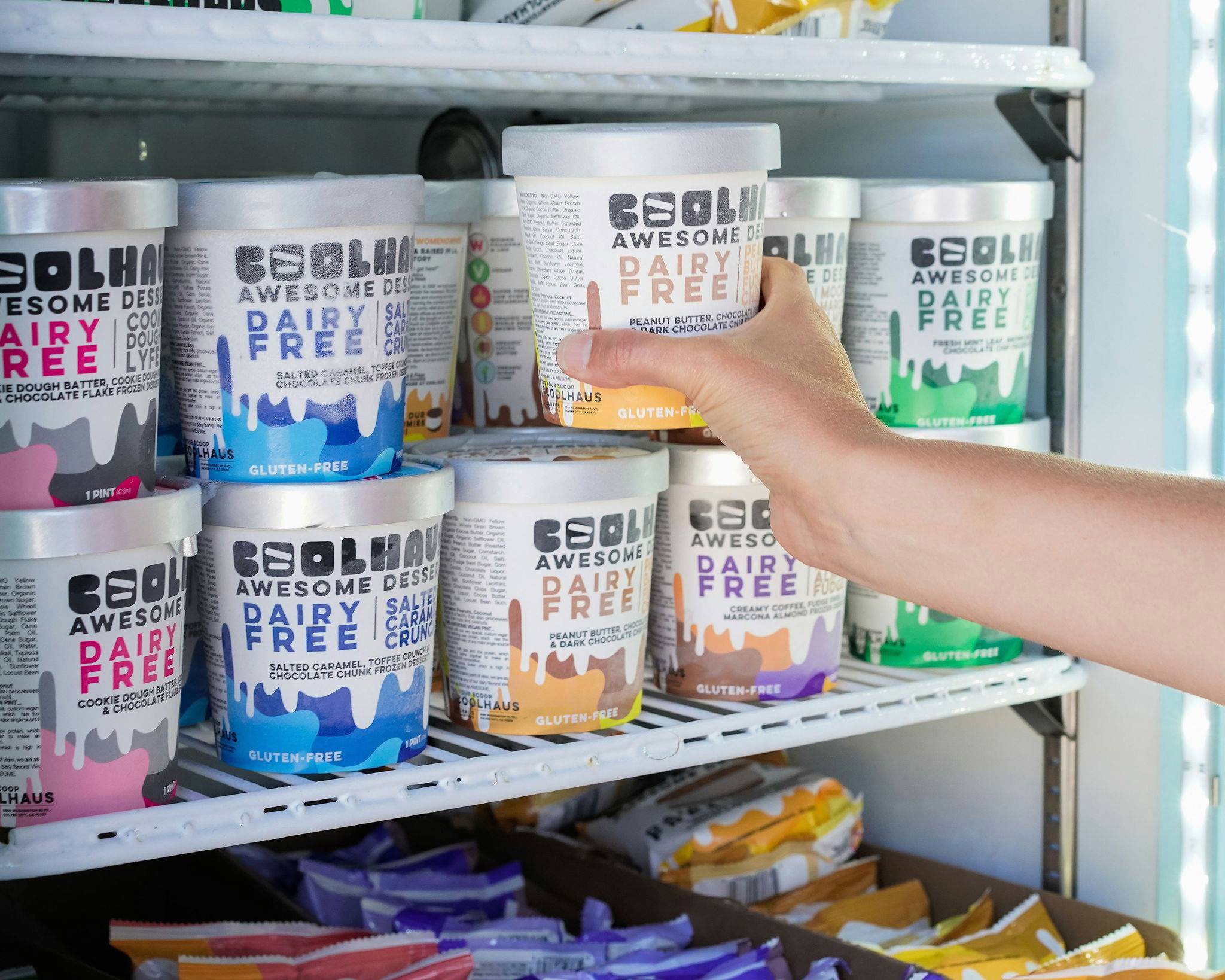 Coolhaus already has some pretty exciting vegan pints, ice cream sandwiches and pea protein cones, but now it’s going to turn its leftover dairy pints to be dairy-free thanks to Perfect Day’s revolutionary animal-free whey. Need something to look forward to in 2022? A co-branded product between TUC’s Brave Robot brand and Coolhaus is on the way.

4Chance the Rapper gets a flavor of Ben & Jerry’s

This week we learned that Ben & Jerry’s is working closely with Chance the Rapper to recreate their favorite childhood dessert. Coming soon to shelves and ball stores in dairy and vegan varieties, Mint Chocolate Chance pays homage to the rapper’s love for homemade fudge brownies topped with mint ice cream. The vegan version is made with a creamy sunflower base that’s filled with sweet brownies like Chance’s mom used to do. 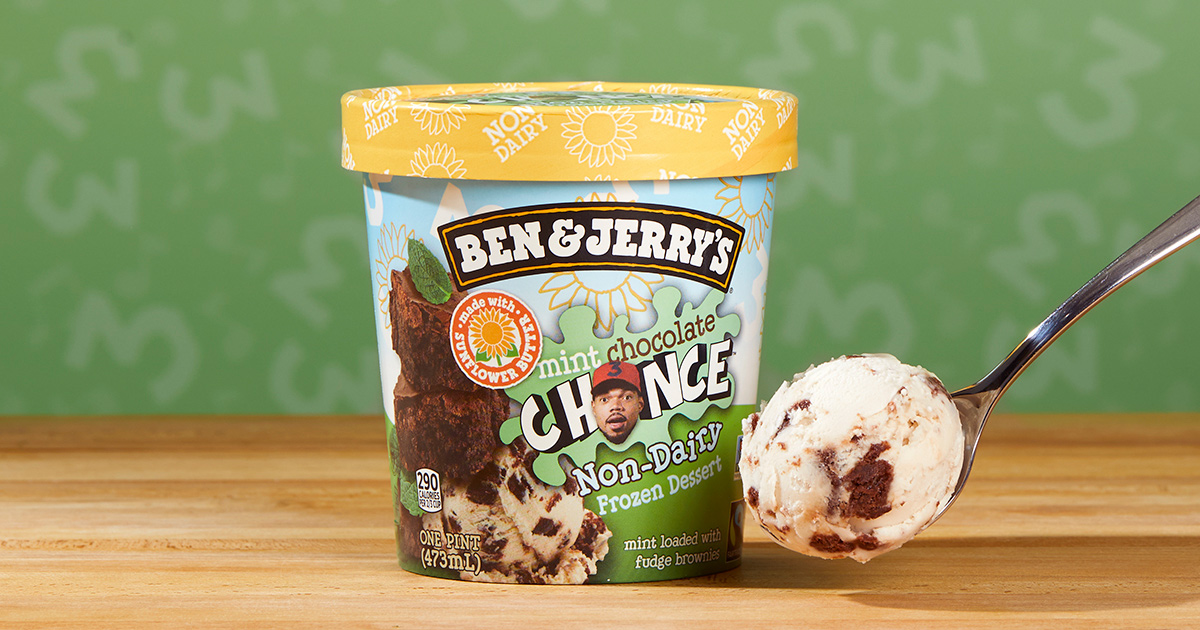 Another benefit of the new Mint Chocolate Chance flavor is that a portion of its proceeds will be donated to support SocialWorks, the musical artist’s non-profit association that helps empower young people through the arts, l education and civic engagement.

Cow’s milk has always been for calves. However, human children just got a whole new option with the launch of Kiki Milk, a vegan milk formulated specifically for children with the help of nutritionists and pediatricians. The first product from PlantBaby, a Hawaii-based brand created by parents Alex and Lauren Abelin, KiKi Milk contains whole organic ingredients and nutrient-dense superfoods such as oats, sprouted pumpkin seeds and spinach, which are rich in omega. and provide enough calcium and plant-based protein. 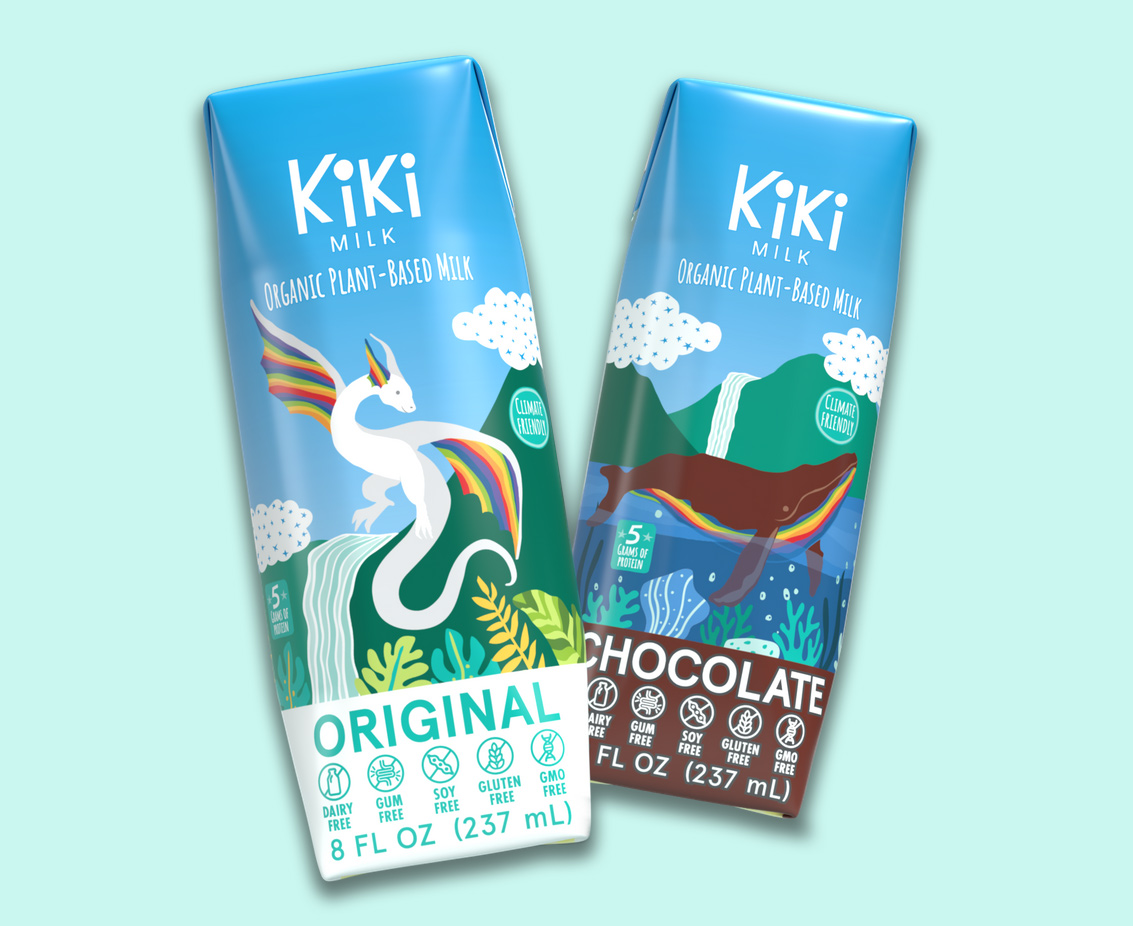 “At PlantBaby, we have identified a major gap, based on our family’s personal experiences, in offering nutritional products designed for growing children,” the Abelins said in a statement. “Our first Kiki Milk product will offer clean, nutritious vegetable milk to support the nutritional journey from childhood to adulthood, while developing delicious and accessible early habits.”

Kiki Milk is available in Original and Chocolate flavors and future PlantBaby launches will be aimed at toddlers, with the goal of offering a broad portfolio of herbal products for children of all ages.

6 Vegan brands are making a lot of money

A few vegan businesses received a big financial boost this week. New brand jack & annie’s has just raised $ 23 million to support its mission to popularize jackfruit, the meatiest vegetable meat of all. The company was launched in 2020 and currently offers 10 frozen food products (such as sausages, buffalo wings and meatballs, all made from jackfruit) that are already sold at 1,500 retailers, including Whole Foods Market. , Wegmans and Target. To create its products, jack & annie’s works with 1,000 farming families in India to support their livelihoods while reusing wasted jackfruit into nutritious, plant-based foods. 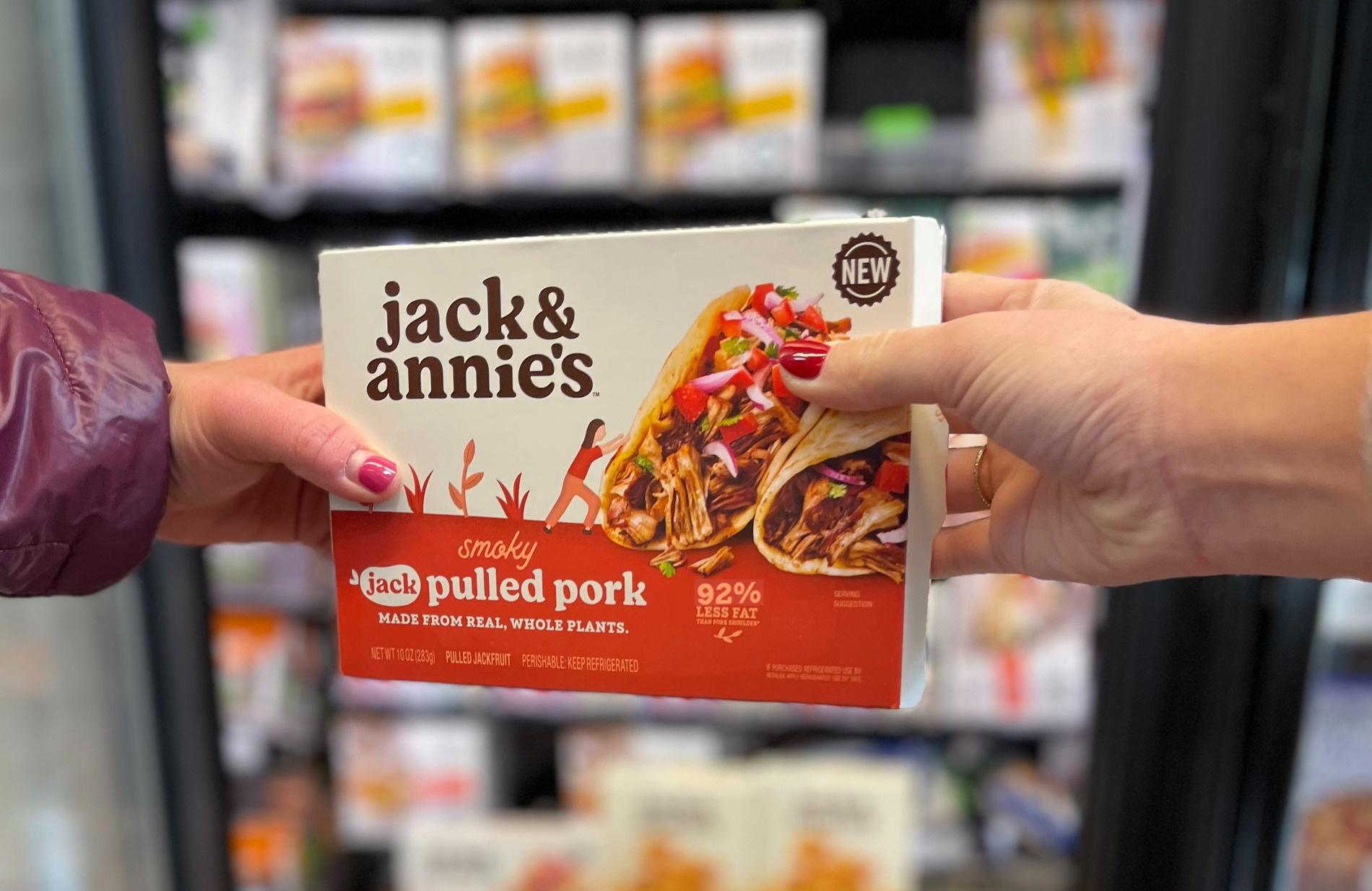 European brand Oddlygood also announced a big investment this week, closing a $ 28 million funding round to fuel its international expansion. Founded in 2018, the Helsinki-based brand is known for its dairy alternatives, including vegan cheddar and mozzarella cheeses, which are available at Koti Pizza, the largest pizza chain in the Nordic region. With new funding in hand, Oddlygood aims to bring its vegan oat-based yogurt to US retailers in 2022. From there, the new year looks pretty bright.

For more on the latest vegan news, read:

WIN: A vegan boost with No Evil Nutrition

Where to find the best vegan food in Chiang Mai